Book Review: The Smartest Guys in the Room 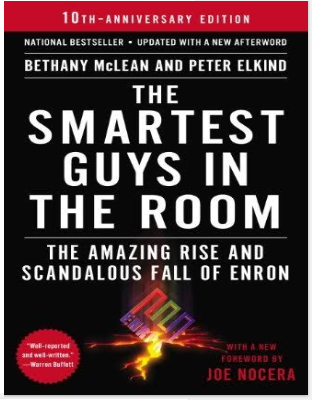 Written by two senior writers from Fortune magazine,The Smartest Guys in the Roomprovides the historical background and comprehensive analysis of the success and destruction of the Enron company.

Enron is a large company in the United States that engaged in the development of natural resources, especially natural energy, such as natural gas, paper, pulp, electricity, communication network systems, and others. Formed in 1985 through a merger between two pipe companies, Houston Natural Gas and InterNorth, the Wall Street darling grew into a company with highly significant progress with Ken Lay as CEO.

However, Enron’s success did not last long. In 1986, Enron reported a first-year loss of $ 14 million and finally in 2001 filed the largest bankruptcy case in US history that cost hundreds of millions of dollars. Enron’s officials were charged with multiple cases, including a criminal case, which resulted in their imprisonment for a dozen years.

The Enron bankruptcy case is caused by fraud that was carried out by the company to increase share prices and attract investors. Here are some of the frauds committed by Enron:

Quoting John Wing’s sentence in the book, “never, never do the easy wrong instead of the harder right,” in the end, Enron’s fraud, which originally aimed to increase profits, ended in bankruptcy. The Enron company case is proof that the absence of a surveillance system makes fraud a culture that ultimately causes harm.