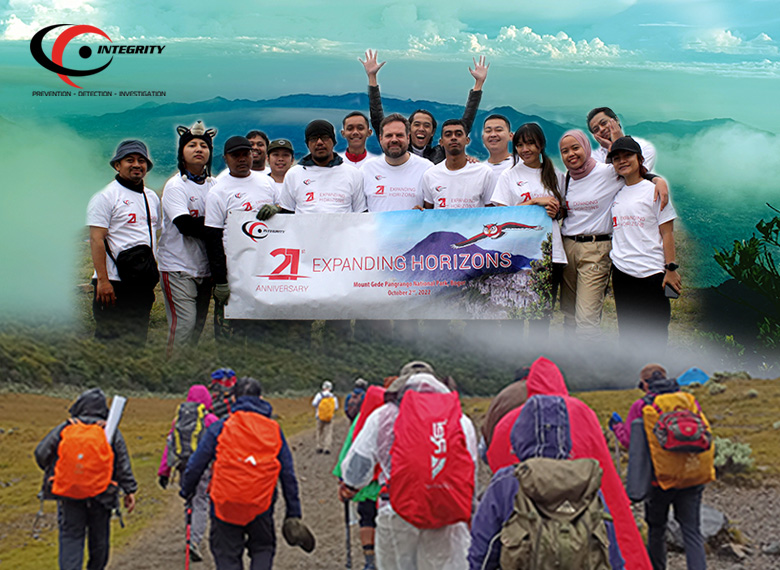 “One cannot see the wider horizon if they don’t change their position.”

For Integrity, the theme “Expanding Horizons” has great significance. It is meant as inspiration to all team members to participate in the expansion of our business, be it in terms of infrastructure, activities or geographical coverage.

Hiking as the celebratory activity also has its own philosophical meaning. “One cannot see the wider horizon if they don’t change their position. So, the mountain was chosen as a place where we can see a wider and further horizon. In the mountains, in the midst of nature, usually more inspiration comes,” said Managing Director of Integrity Asia, Mr. Edouard Helfand.

This activity was attended by employees from various departments. The hiking trip, which took about nine hours, began on Saturday, October 1 with the starting point at Basecamp Putri.

Arriving at the camping area, the event began with a barbecue for dinner and preparations for the hike to the summit, which would be done the next day. The journey to the summit would take 35 minutes from basecamp.

On Integrity’s anniversary, October 2, at an altitude of 3,008 masl, the summit of Mount Gede, the participants raised the Integrity’s banner as a sign of celebration.

Solidarity, shared vision, cooperation, toughness, and wider insight were honed during the hike of Mount Gede. Even though the participants are not professional climbers, they showed great enthusiasm and never gave up until they reached the top!